Acupuncture is the ancient Chinese practice of inserting thin needles in to specific points of the body to improve circulation and reduce pain. It is believed by practitioners of acupuncture that ‘qi’ or ‘vital energy’ is redirected by the acupuncture process thereby helping the body heal itself.

Acupuncture works by redirecting qi "vital energy" in the body. Pain or illnesses are treated by attempting to remedy local or systemic accumulations or deficiencies of qi. Pain is considered to indicate blockage or stagnation of the flow of qi, and an axiom of the medical literature of acupuncture is "no pain, no blockage; no blockage, no pain".

While it is claimed by some that there is no physical evidence for the existence of qi or for its claimed effects, and that acupuncture is therefore a pseudoscience or metaphysical belief, many patients experience the sensations of stimulus known in Chinese as "deqi" ("obtaining the qi") This was historically considered to be evidence of effective treatment. Often deqi takes the form of a propagation of sensation along the trajectory of the so-called acupuncture "channels" or meridians. Research into the phenomena of "deqi" has mostly been conducted in China and Japan.

Treatment of acupoints may be performed along the 12 main or 8 extra meridians located throughout the body. 10 of the main meridians are named after organs of the body (Heart, Liver etc.) two after so called body functions (Heart Protector or Pericardium, and San Jiao, "triple heater"). The two most important of the eight "extra" meridians are situated on the midline of the anterior and posterior of the trunk and head.

The acupuncture treatment is carried out by an acupuncturist who is schooled in the accurate placement of the needles along the 12 main and 8 secondary meridians located throughout the body. 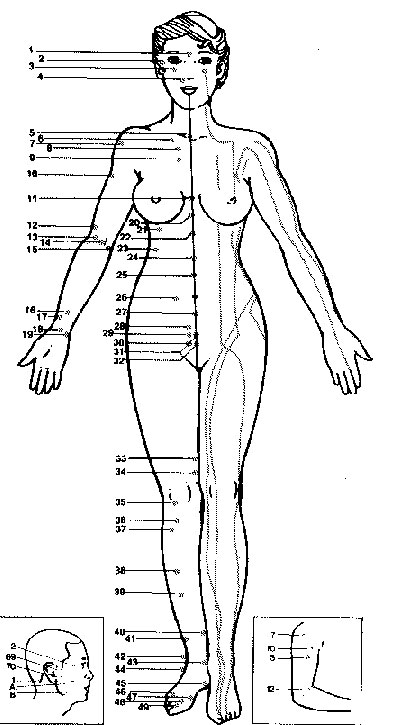 The acupuncturist will decide which points to treat by thoroughly questioning the patient, and utilizing the diagnostic skills of traditional Chinese medicine, such as observation of the left and right radial pulse.
There are various schools of acupuncture theory, including

Blushing when nervous is a sign that there is too much heat disturbing your mind and spirit. The heat makes your nervous system over-excitable and then all it takes is the extra stimulation of a little extra stress to produce your symptoms. Acupuncture powerfully strengthens and calms the nervous system and is very effective in treating nerves and blushing. There should be good improvement after six treatments, though the full benefit may take longer to achieve. Treatment will use points such as "palace of the heart", a point on the hand which is a fire point on a fire meridian and so very effective to clear heat and calm the spirit. This might be combined with "shining sea" near the ankle, which strengthens the water element to control the heat.

The heat is probably arising from anxiety, worry or depression, and this can be helped by learning breathing methods and techniques of deep relaxation, perhaps by joining a meditation class. You should also ask your acupuncturist to show you some points which you can treat yourself with acupressure massage just before a stressful occasion.

This treatment combined with and/or without herbs may be effective for some people.